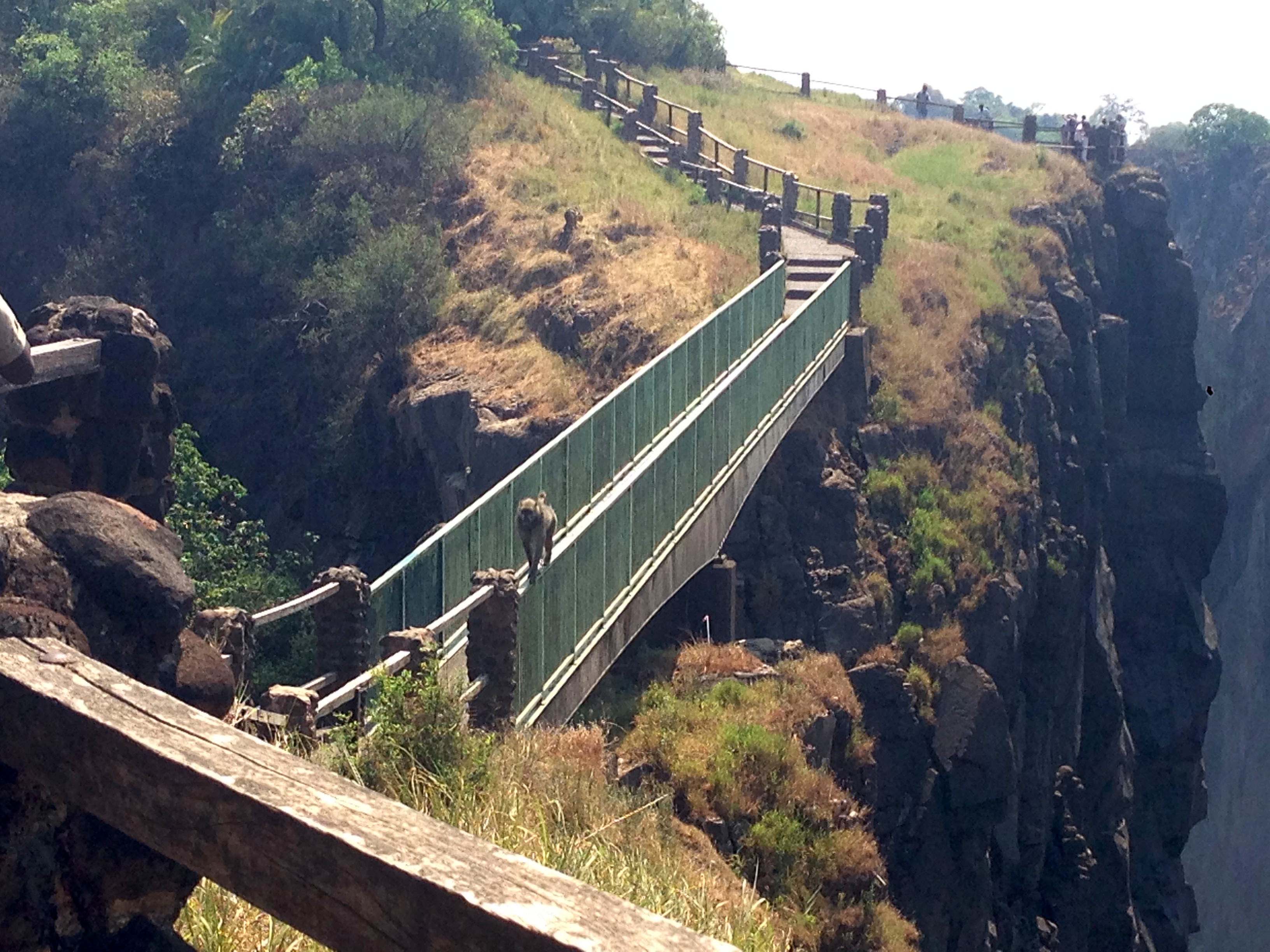 As a general rule, I don’t mind animals. I think this likely has something to do with the number of animals in and out of my household when I was a child (not due to animal deaths so much as shear animal numbers). But I like soft cuddly pets; I do not expect a gigantic, probably rabid, free-roaming wild creature to come after me while I’m on a nice afternoon stroll in a national park at one of the Seven Wonders of the World.  That will always be surprising to me.

Here’s the one caveat I should mention: this is not a story unique to myself. I’ve had friends and strangers alike recount similar tales. I’ve had people tell me to beware of the baboons. I’ve walked in the presence of these terrifying creatures with caution and awareness that these are not the friendly primates that will gently hold my hand and guide me through the wilderness. No; baboons hiss viciously and leave you with no doubt that they are able to rip you to shreds in an instant.

This past weekend, we road a 14 hour bus from northern to southern Zambia. We walked to our dorm style hostel in just a bit of darkness. Saturday morning, we took a tour of Livingstone Island, swam across a current leading to the drop off and dove into a pool situated at the top of Victoria Falls. We swam in this pool with only a natural rock barrier for our protection. (These would have been the times I almost expected something crazy to happen.)

After a relatively uneventful and simultaneously incredibly awesome morning of adventure, we changed from our swimsuits, placed our wet clothing into a plastic shopping bag, tucked the plastic bag into a larger black tote and went into the park to actually see the falls and walk around a bit.  I last took a friend to Livingstone in April, just after rainy season when the amount of water flowing through was just remarkable and basically prevented any view of the waterfall. This time around, I was amazed at the length of the waterfall as well as the amount of the expanse I was able to see in dry season.

I was thinking about this when we saw our first baboon.

He may not look as fierce at this distance, but let’s not forget, I have seen him before. 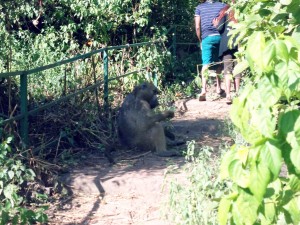 As he walked the rail headed in our direction, the Zambians and foreign tourists, myself included, began to disperse in hasty fashion.

And from there, everything is a bit of a blur. At some point, I realized he had zeroed in on me, but I continued to walk steadily away from him following another American tourist down what I decided was my escape path. She yelled “he’s following us” and I turned to see his hand reach out and grab hold of my black bag. Panic ensued, I hit the ground in slight roll/tumble fashion and yelled at the baboon “Please, don’t take my bag.” He was undeterred and continued coming at me, so I shoved my bag at him and watched in complete helplessness.

He reached in my bag, under my sarong and wallet and camera and any number of other valuables and grabbed the plastic bag full of wet clothing from the depths of my catchall. He then walked not five yards from me, sat in the brush, tore open the bag and picked each item out piece by piece, dropping each to the side after he had decided they were not food. He got to the end of the contents and shook the bag upside down just to be sure he had not missed anything edible. He then turned back to me, gave me a once over/look of intense disdain that could only have meant “you have disappointed and disgusted me with your lack of food” before turning to walk 10 yards down the path and sit and watch me just to be sure I did not have some other secret place with hidden food. Or at least to be sure I maintained the proper amount of terror from being in his presence.

This would be the time when my 3 former friends/companions began to peek around the corner of the other side of the forked path as I was collecting our bathing suits and other discarded garments from the ground. They had all high-tailed it in the opposite direction of me  when they, too, realized this baboon had my number. One was  reported to have said “I am legitimately terrified right now” as I screamed in the opposite direction.

So when you go for a swim and your friend very smartly brings a plastic bag to discard clothing into – make her carry it. At all cost. 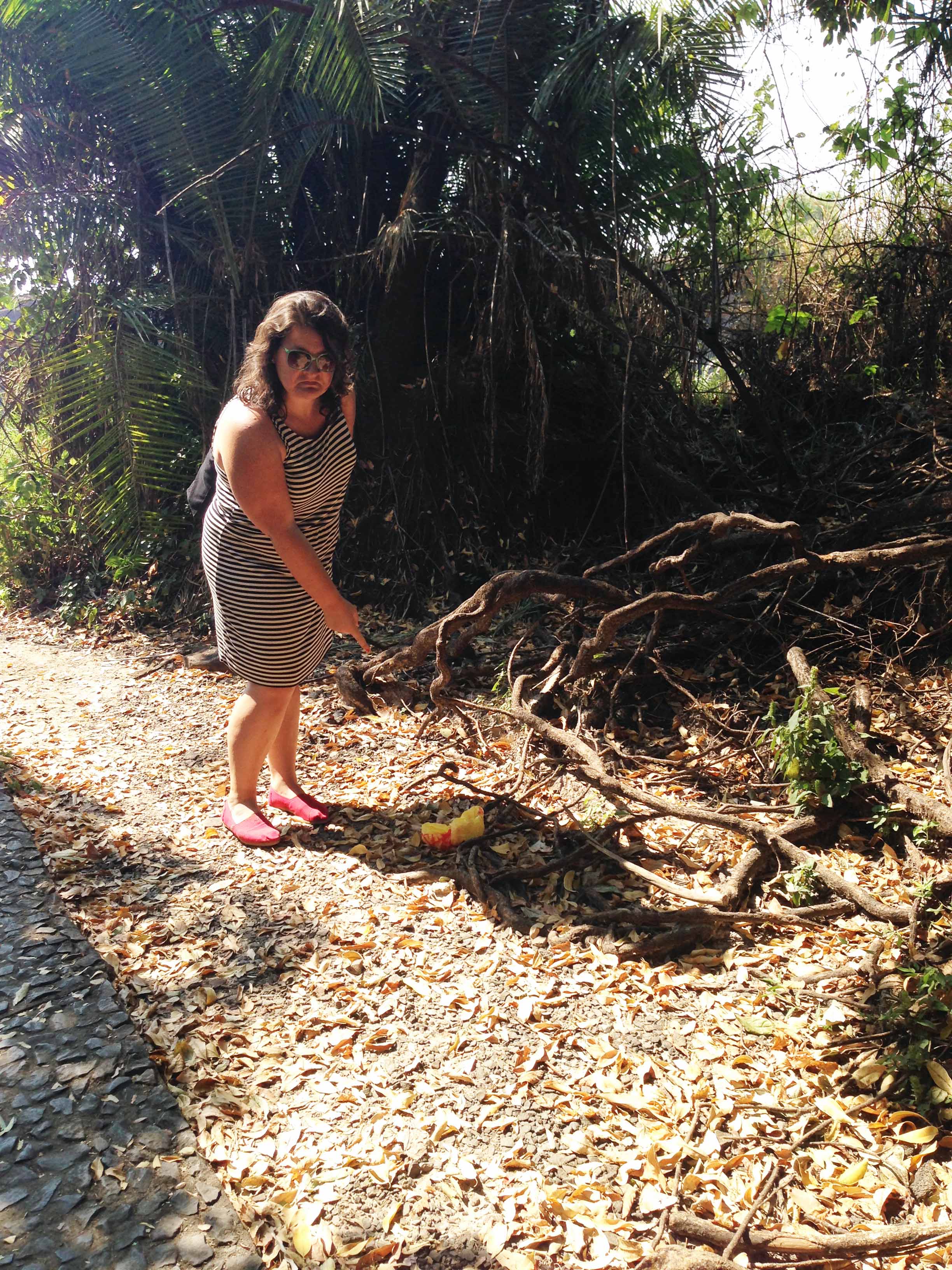 *apart from a few scrapes and  bruises from my tumble, my person and belongings made it through this ordeal unharmed.