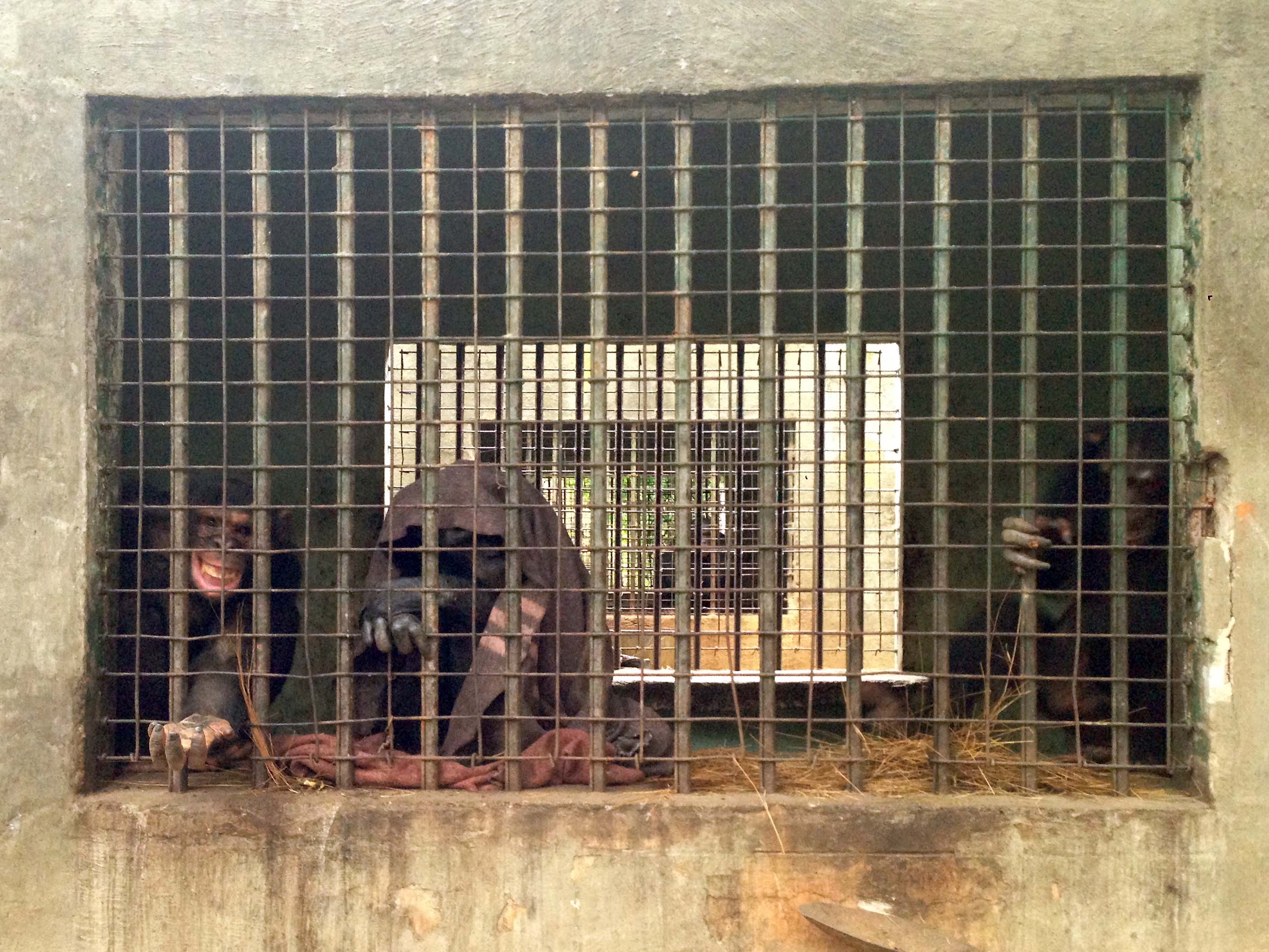 Okay, okay, okay. So here’s the lowdown on my adventurous weekend.

There is a mysterious chimpanzee sanctuary somewhere in the backwoods of Zambia. That’s all I really knew on Friday when I drove to meet up with a friend before setting out to find this place Saturday. We tentatively packed to stay an extra night and took off into the great unknown hoping that the signs along the way were really as well marked as the guidebook indicated.

Stopping for peanut butter and bread along the way was really what slowed us up. We got turned around in our pitstop town, but after an additional half hour we were back on our way. From there, it was just an hour on the main road and another half hour down the dirt road, and voila! We found a sign marked chimps!

After the long haul, we decided to go all in. We booked beds for the night and signed up for the bush walk the next morning.

What is a bush walk, you ask?
Well, a bush walk is when you go through a couple of tiny well secured doors/holes in the wall and into an enclosure dressed in a work suit and with pieces of bread crammed into your pockets.

Why do you have bread crammed into your pockets?
Because four adult chimpanzees will be joining me for this walk.

I turned to the couple that had joined us on our walk and said “I’m not going in there first.” So they led the way. I crawled on through only to realize the chimps would only be let in after we were adjusted a bit. We all stood in a line. They were released, and sure enough, they made a beeline for our pockets. Cindy reached for the empty one, it had been torn before, and finding nothing, patted down all my others. When she’d grabbed enough for awhile, she sat at my feet and calmly ate – while remaining within reaching distance of everything else in my pockets.

We all went on like this for a bit – long enough to have empty pockets. The chimps started to trickle down the path and out of sight. This was our cue to actually start walking.

It was truly a bizarre experience. We’d heard stories the day before of how these chimps had been rescued from various places and had come to be at this reserve. We’d watched feeding time and listened to their excitement just before being released into the relative freedom of their enclosure. We’d watched as they picked up their guavas, used their teeth to peel the fruit and then munched away. Some seemed eerily human-like, even while in a cage. 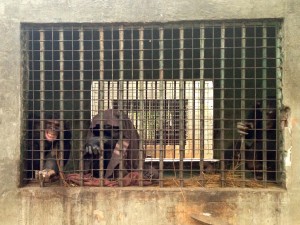 But when Cindy reached out and grabbed my hand to lead me off the beaten path for our walk, I was blown away. I stepped in fire ants and held my leg out to her – she proceeded to pull my pants leg towards her and slowly eat the ants off one-by-one. Sims walked away from the crowd; I walked over to join him. I sat next to a 20 year old chimpanzee and he held out his hand and began to gently scrape my hand with his nail, checking to be sure the freckles on my palm were just freckles and not insects. He continued this for the next ten minutes or so, gently scraping off all the leaves and twigs that had attached themselves to my clothing.

Bizarre as it was; it was truly incredible. But you’ll mostly have to take my word for it. For reasons mostly incomprehensible to me, pictures are not allowed on the bush walk. So I find myself asking, if you have an incredible life experience but there is no one around to take a picture for you to instagram, did it actually happen? Obviously, it did, but I would so like to have a selfie with me and Sims just hanging out. Instead, I got Jewel. 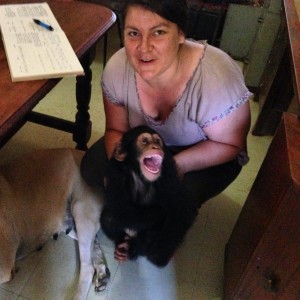 The final piece of the day involved going into the main house to meet the founder of the organization. She’s in her 80s and still Mama to many of the orphaned
chimps. Including Jewel. He’s a one year old whose mother died giving birth. The keepers say he was just stubborn from the start and wouldn’t take to any of the other chimps, but insisted on remaining in the house. So he’s been brought up there, while slowly being integrated into the larger population. He wears a diaper and sees the home as his turf.

Things with Jewel started innocently enough, with him turning somersaults while hanging onto my arms. But as I moved into the house to sign the guestbook, he started using those teeth. I had to strong arm him. Literally strong arm him to keep him from continuously clamping down. {He only got in one good bite, and I have the marks on my forearm to prove it.} Trying to take a picture with him was remarkably similar to trying to get a good shot with my nephew.

Our adventure into the unknown turned out even better than expected.